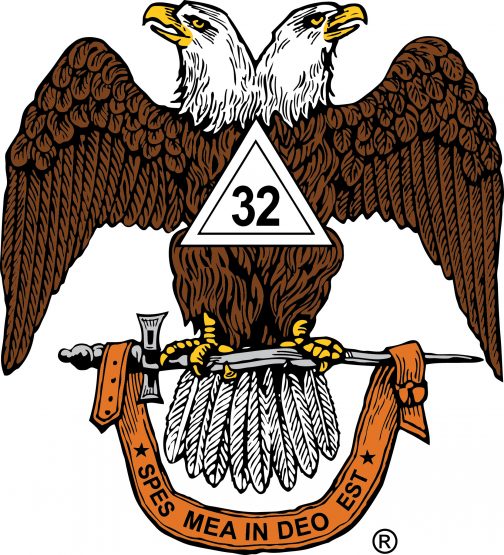 What is the Scottish Rite?

The Scottish Rite is a Masonic organization that continues a Master Mason’s education of the first three degrees.  Other examples of Masonic affiliated organizations are: The Shrine (Shriners); York Rite; Grotto; Eastern Star, DeMolay International, Job’s Daughter’s, International Order of Rainbow for Girls and the Tall Cedars of Lebanon.  The Scottish Rite consists of the 4°–32° and an honorary 33°, which is awarded for exceptional service.

Why is it called the House of the Temple?

The name “House of the Temple” is traditionally associated to the word Heredom, a significant word in high degree freemasonry, a derivation of which, suggests the Greek words hieros-domos, meaning “Holy House”, thus referring to the Temple of Solomon, which is central to Masonic ritual and symbolism.

Is Freemasonry a religion?

No. While it is a requirement that each member believe in a Supreme Being, it is not important how one expresses that very personal belief.  Further, there is no dogmatic system in Freemasonry.  However, confusion about the secular nature of Freemasonry has been a common misconception for many years.  Most likely, this misconception is due to the Holy Book that sits on the altar in the middle of a Masonic lodge. This Holy Book does not have to be Christian, like the Bible, rather it can be any Holy Book that is important to the members of the lodge. In the U.S. where the population is mostly Christian, the Holy Book most often used in Lodges is the King James Version of the Bible.

Is Freemasonry or the Scottish Rite a secret society?

Absolutely not, the Scottish Rite and other forms of Freemasonry operate very much in the open with many events open to the public. There are “modes of recognition” (passwords and handshakes) that represent a Mason’s ability to keep a promise.

How can I join?  Do I have to be invited?

Freemasonry is a fraternity (for men) whose membership must be sought by the candidate. So, in other words, to be a Mason, ask a Mason how to become a member. Learn more.

Do I have to be Scottish to join the Scottish Rite?

No. The Scottish Rite degrees actually originated in France and were based on legends that came from Scotland, so “Scottish” is in name only.

How many people belong to the Scottish Rite?

There are about 1.7 million Masons in the United States and about 550,000 of those are Scottish Rite Masons.

What do all the symbols mean?

There are simply too many symbols used in Masonry to explain them all, but probably the most common symbol people see is the square and compasses. The square reminds Masons to “square” their actions by the “square of virtue,” and the compasses remind them to “circumscribe” their passions.  In other words, Masons are reminded to keep their actions virtuous and their passions in control.  Additionally, in the U.S. there is usually a “G” in the middle of the square and compass symbol. This letter stands for “geometry” and “God” and reminds Masons that geometry was central to the stone mason’s life as God should be to his.

What is the official name of the Supreme Council?

The name of the Supreme Council reveals history, tradition, and accomplishment. The official, full name of this Supreme Council is: “The Supreme Council (Mother Council of the World) of the Inspectors General Knights Commanders of the House of the Temple of Solomon of the Thirty-third degree of the Ancient and Accepted Scottish Rite of Free Masonry of the Southern Jurisdiction of the United States of America.”

What is the purpose of the hats?

If the apron is a badge of a Mason in Blue Lodge, the cap can be said to be the public badge of a Scottish Rite Mason. It is considered a part of the uniform and the different colors indicate the degree of the wearer. (black – 32nd, red – KCCH, white – 33˚)

The Scottish Rite Fourteenth degree ring is a flat, plain band of gold, and embossed thereon is a plate in the form of an equilateral triangle and within the triangle is the Hebrew letter yud, the initial letters of Jehovah in Hebrew (yud he vau he). Inside the ring is inscribed the Fourteenth Degree Motto: Virtus Junxit, Mors Non Separabit (Virtue has united and death shall not separate). The rings circle expresses the unbreakable fraternal bond between Masons of all generations. Upon the death of the owner, the ring should go into the hands of his widow, eldest son, the friend who was loved above all others, or another Scottish Rite Mason.

Source for above information

Scroll back to top